A body thrusts itself into the sky, A magnificent mountain is a Yao! Here is the tallest building in Beijing -- Beijing Citic Tower, which is also known as "Zun of China", with a height of 528 meters, because its design is inspired by the precious treasure of traditional Chinese rites -- "Zun". As a new landmark of the capital, China has created eight of the world's best and 15 of the country's best, fully demonstrating China's height, strength and wisdom. A total of 15,132 meters of lifting cables customized by Far East Cable for China opened up the "main artery" of the entire building, guaranteeing the safety and stability of the power supply. One of the special 10kV high-voltage lifting cables is 820 meters long and weighs 8 tons, which is the world's largest, attracting coverage from mainstream media such as CCTV.

The Unified Standard for Civil Building Design GB50352-2019 stipulates that the height of a building greater than 100.0m is a super high-rise building. Super high-rise buildings are like an upright street, and the higher the extension to the height, the higher the requirements on the structure, mechanical and electrical, elevator and other aspects. Especially in the distribution system, the power supply distance, cable length, cable size and installation process are the main difficulties.

As early as 2005, related invention patents were obtained for cable laying by hanging in the cable super high-rise building in the Far East, and a complete set of installation and laying specifications were formed, filling the gap in the industry. On December 24, 2017, the vertical cable laying and spreaders for super high-rise buildings passed the new product identification of Jiangsu Provincial Commission of Economy and Information Technology. Experts agreed that the comprehensive performance of the products reached the international leading level.

Although it has been successfully applied in the Shanghai World Financial Center before, there is no slack in the Far East Cable for China's prestigious project. From the beginning of the project, Far East Cable has conducted several discussions with Beijing Architectural Design Institute on the technical requirements and laying scheme of cable products, and designed a thorough and systematic overall solution.

Far East Cable has created the carrying cable. Three steel ropes are embedded in the vertical section of the cable, and the hoisting disc is equipped, and the steel rope is stranded with the three cable cores. In the process of lifting and long-term running, by force of the steel wire rope and lifting disk, no matter how long and heavy, the cable can support the self weight, and solve the problem that ordinary cable in the vertical laying of long distance is easy to be pulled by its own weight.

It is understood that, in addition to suitable for small area cable on well installation, usage environment and reliable tensile strength, the product also has flame retardant, fire resistance and other safe and environmental characteristics, to ensure the fire system power supply requirements, to ensure the reliability of power supply in high-rise buildings.

Super high-rise buildings have a lot of electrical equipment, so the construction team needs to consider obtaining more space for the owners and minimize the space occupied in the cable arrangement.

In the Shanghai World Financial Center project, one of the 10kV lifting cables supplied by Far East Cable for super high-rise buildings is 708 meters long and weighs about 14 tons. The cable hoisting height from 131 to more than 400 meters, through the underground horizontal section, vertical section, high-rise horizontal section to complete the installation, which was the first time in the domestic construction field of hanging laying. It was very difficult to achieve a safe and continuous arrangement of 10 10kV cables in a strong electric well with a width of only 450mm.

In order to ensure the safety and feasibility of laying cable, the Far East team many times went into construction site. After many design, discussion, modification with CCIEE, we created a kind of new configuration mode and a plate of double hanging bearing spreader, which solved the problems of narrow space and it’s the first time in the world. 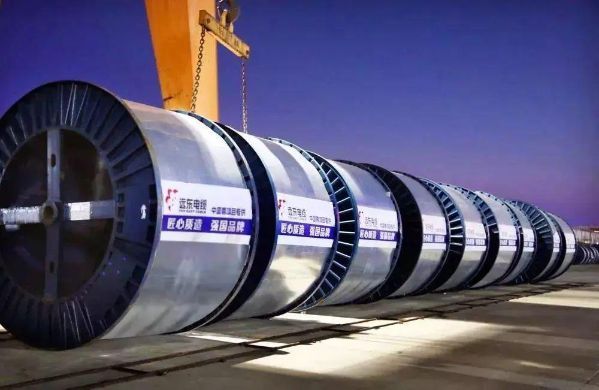 According to the personage inside introduces, cable laying in super high-rise buildings mainly includes wire rope traction lifting laying technology, cable damping buffer laying technology, hanging cable laying technology and other construction schemes. The hanging cable is a new type of cable, which can replace the traditional armored power cable, and can withstand the larger tension itself. Without considering the super high-rise factors, it can meet the functional requirements and have the characteristics of saving time and effort in laying, short construction period, and occupying less space and area of laying. The overall investment cost is low, so is the maintenance rate.

"Only those who are sincere can achieve the utmost". The pursuit of perfection comes from the precise control of every detail, which is a kind of focus and innovation connotation of the Times. Because of "extreme" in a timely manner, Far East Cable grasped the general trend, seized the opportunity, faced the problems head-on, and only strive to break through the "bottleneck" problem. The high attitude of China's economic and social development in the new era is defined by the achievements of technological innovation. It vividly interprets the great significance of building heavy equipment together, forming the foundation of China and contributing to the great cause of rejuvenation, and constantly promotes the transformation of China from a manufacturing power to a manufacturing power.